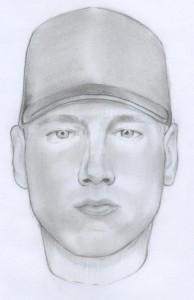 It has been a violent week in Vancouver. On Saturday, May 10, 27-year-old Thi Tam Nguyen was found murdered in her home near Rupert Street and 41 Avenue. The next day, a 13-year-old discovered the body of Nguyen’s ex-husband hanging from a tree in Gladstone Park off E. Kent Avenue. Media release

Around noon on Sunday, an 80-year-old Asian man was robbed while walking through Oppenheimer Park in Chinatown. A 30-year-old woman dragged him into a washroom, choked him and left him unconscious. She took off with a small amount of cash. The victim was hospitalized with bruises and a broken nose.

And, as we shared on our Facebook and Twitter feeds, the Vancouver Police have released a composite sketch [left] of the suspect who sexually assaulted a 22-year-old woman on Cambie Street at 5:15 p.m., the height of rush hour. The suspect--a 25-year-old male with sandy blonde hair wearing a red baseball cap, navy blue three-quarter-length jacket and baggy denim jeans—approached the victim and threw her into the bushes.

Police believe he may have been loitering in the bushes on the northwest corner of Cambie and 41 Avenue before the attack. If you were in the area at all around the time of the attack and noticed anything suspicious, or recognize the suspect, please call Vancouver Police Sex Crimes Unit at (604) 717-0603 or Crime Stoppers at 1 (800) 222 8477. Media release

On May 13, a 30-year-old woman was walking on Rhodes Avenue near Kingsway shortly after 2:30 a.m. when she was grabbed from behind. A man threatened her, but ran off when she vigorously fought back. Media release

Violent crime statistics can be discouraging.

In Canada, every six days, a woman is killed by her current or former partner.  [Canadian Women’s Foundation]

More than 13 women and girls are sexually assaulted in B.C. every day. [Fraser Health Authority]

Women are 11 times more likely to be victims of sexual offences than men. [Statistics Canada]

So what can you do? The U.S. Office on Women’s Health publishes a sexual assault fact sheet , including prevention tips and ways to help victims. The RCMP also offers guidelines for seniors’ safety on the streets. The Canadian Women’s Foundation has many tip sheets on domestic violence, including one on prevention.

By learning how to prevent violent crimes and help victims, you can be a part of the solution.