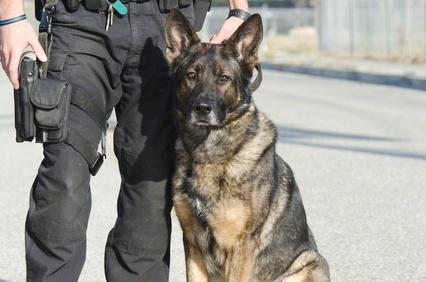 Every week at Radius, on our security cameras, we see police dogs in action. Searching for intruders at a marina or construction site. Or apprehending a fleeing suspect. K9 police units across the Lower Mainland play a key role in catching criminals.

The RCMP’s Integrated Police Dog Service fields 43 dog teams, 22 hours a day, seven days a week. Their mandate is to track and search for suspects, evidence, drugs and explosives. General duty K-9 officers are purebred German shepherds. They are selected for their even temperament, hunting instinct and sound character. The RCMP prizes these German shepherds for their versatility, strength and courage. And because their presence intimidates criminals.

The Vancouver Police Canine Unit is made up of 15 teams working 24/7. Fully operational since 1957, the VPD dog squad is the oldest in Canada. These four-legged officers even have their own Twitter account, @VPDCanine, and their own collector cards. They arrive in Vancouver from select breeders in Canada, the United States and Europe.

Aside from building good relations with school kids, the Vancouver police dogs deploy with the Emergency Response Team (ERT), the Public Safety Unit (PSU) and the Marine Unit. For safety reasons, they wear custom-fitted ballistic vests and ride in SUVs with air-conditioned kennels and heat alarms. On the job, they typically attend when crimes in progress, or which have just occurred, such as

Eight of these VPD canine officers have died in the line of duty.

At Radius, we are proud to work with local police units, human and canine, to stop crime.